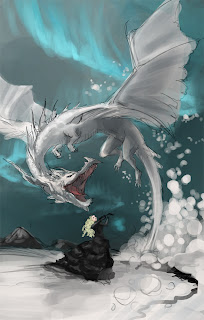 I reworked the concept (rather early, too, I usually like to save my reworks until I’m at least halfway done with the original idea :D) and I like it sooo much more now!! This is going to be sweet when it’s done.

I wasn’t able to work on it over the last week because I lost my primary hard drive last Sunday. After 5 years of faithful service, it just gave out. I had backups of what was most critical, but backups were spottier for large PSDs, my student work, downloads, mp3s, etc. The drive was far larger than any of my external backup drives, and as such the losses were significant. I spent the last week’s worth of free time rebuilding and recreating what I could of what was lost. I’m sure that in a year it won’t seem like a big deal anymore, but for now it’s uncomfortable to be starting fresh again.

Painting is a good way to move forward.