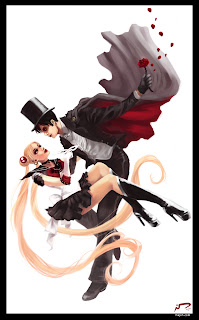 At last, the series is complete!

The whole thing started after Jim and I watched a few episodes of the Japanese-made live action Sailor Moon show on YouTube. Drawing Sailor Moon coincided with me getting serious about art when I was around 12/13ish. I thought it’d be fun to revisit the characters, having not drawn them in some 15 years or so now. I started with Moon originally but mid-way through, got a great idea for Mercury and painted her instead. She became the first in the series that would eventually include all of the main cast, and would occupy me from March to May. As I worked on the others, I kept revisiting this one, starting it over a couple times and changing its direction each time.

This summer was really a bad time for painting, though – my Dad came to visit in May, Jim and I looked at an endless stream of real estate in June, I went home to Illinois for a week and a half, I worked at GenCon with some friends in Indiana, I took up evening exercise (in addition to my hour in the morning) in effort to kick start some weight loss, my job sent me to CA for a few days, and then I was sick with the flu for a week – it’s just been nuts, and I wasn’t able to paint regularly for most of the summer.

But the best time of year is here at last! Autumn and winter are my favorite seasons. I feel inspired, and free time has returned. I was finally able to finish this series!